Amp Up for the Future

Amp Up for the Future

Amp Up for the Future, Securing the KKFI Tower Easement

Thanks to these generous donors who matched the first $83,000!

We are fortunate to own our broadcast tower, but we do not own the land on which it sits.  We have been leasing the property in Independence, MO, but it was recently sold and the new owner is planning to resell it in early 2022.  The owner has offered us a permanent easement, provided we sign an agreement by April 1, 2022, so we must act fast.

The project cost is $350,000 and we have already raised over $187,000 (over 53%) in commitments thanks to a few generous early donors. In radio, signal reliability is critical. We must have permanent access to the tower when repairs and updates are needed.  We have explored all options and purchasing a long-term property easement is the best because it will provide unlimited access, and eliminate the $21,468 in annual rent we currently pay, which will allow us to invest in even more local programming.

We are asking you to consider making a special gift or a two-year pledge.  Of course, we hope you will consider this in addition to your annual support, which is so important for our operating budget.  We can not do this without the support of the community and we would not have it any other way. 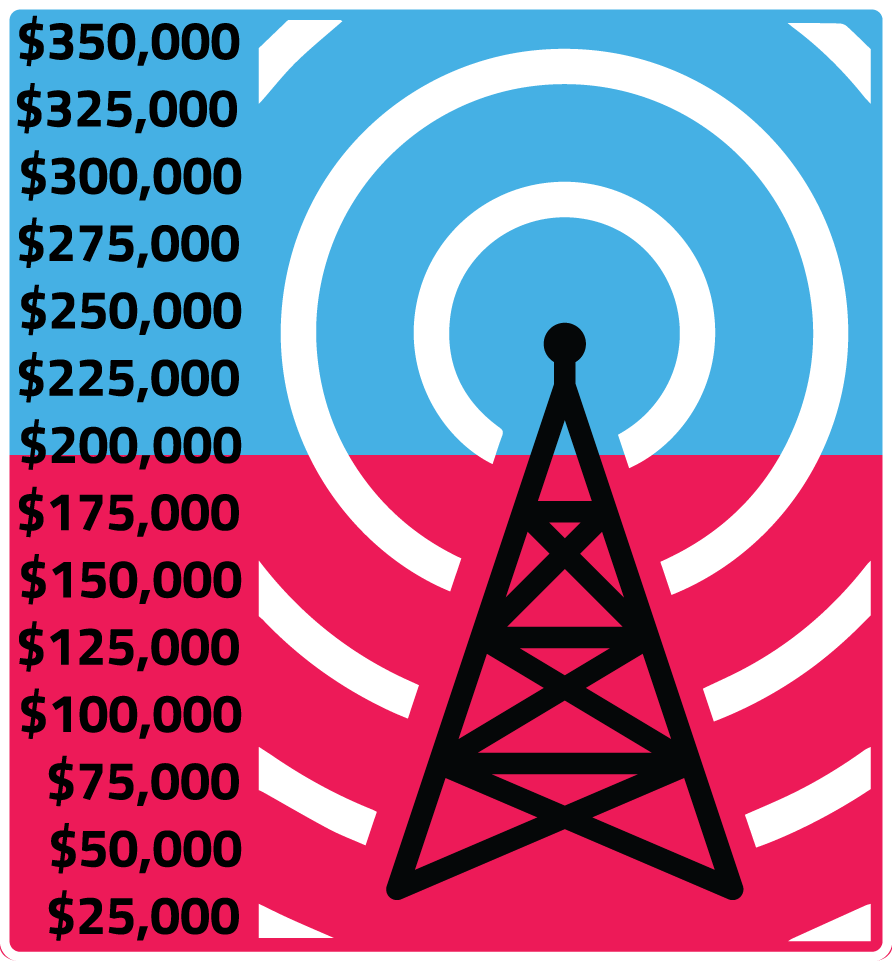 Gift or a Two Year Pledge
Satisfy your pledge all at once or though monthly, quarterly, or annual payments, or you may create your own payment schedule and we will send you gentle reminders.

Gift of Securities
Gifts of highly appreciated assets, such as stock with a low-cost basis, make excellent charitable gifts. By donating stock, you can avoid capital gains and significantly help KKFI at the same time.

IRA Disbursement
If you are 701⁄2 years of age or older, you may find it beneficial to contribute from your required minimum distribution. Please see your financial advisor or contact our office for more information.

Deferred gift
A planned gift – or other type of deferred giving arrangement – may better suit your financial needs. This may be a simple gift by bequest or a more complex gift through a trust, or another arrangement.

We are the only source of radio programming for specific underserved audiences such as the Native American and LGBTQ+ communities. We are also the only source of free broadcast and podcast training for anyone who expresses interest. Listeners rely on KKFI for public affairs analysis, new music, drama, and community events.

Recently a host of “The Tenth Voice” radio show said a listener called in to say that KKFI had literally saved their life. They had been contemplating suicide and felt very close to the act when they tuned in 90.1FM and heard a broadcast that changed their mind. They said hearing that program gave them hope enough to carry on.

Of the more than 200 volunteers who make KKFI possible, none of us hope to receive a call like that, but we are filled with gratitude that our work is not only building community, but saving lives.

Station programming is varied, in keeping with our mission statement.Public affairs, news, and arts programs make up a third of our programming, 75% of which is locally produced and features local, national, and international topics including social justice, equality, ecology, feminism, racial justice, LGBTQ, labor relations issues, and the local arts scene, including the region’s only locally produced radio plays. This year, KKFI was awarded “Best of Underserved Voices – Community Radio” recognition from the Alliance for Community Media Foundation’s Hometown Media Awards for the “TransTalk” segment of “The Tenth Voice”, KKFI 90.1FM’s LGBTQIA+ radio show

KKFI’s music programs are 95% locally produced and feature many artists from our community. KKFI was awarded “Radio Station Who Best Supports the Kansas City Music Scene” at the 2019 Kansas City People’s Choice Awards and the music magazine Paste included KKFI in a list of “10 public radio stations you wish were in your town,” citing our music diversity. Many of our volunteer music programmers are working musicians and are tightly connected to the music community.

With only four full-time staff members, KKFI always has been and remains a primarily volunteer operation. Roughly 100 volunteers spend close to 9,000 hours per year producing on-air programming 24 hours a day, with another 12,000 hours or so spent by volunteers providing governance of KKFI, station management, reception desk staffing, music library management, and support for pledge drives, fundraising, and outreach events.KKFI provides free broadcaster and podcaster training to anyone who wants to learn show hosting, broadcast engineering, and/or podcasting.

KKFI’s community of volunteers and listeners is proud to serve the Kansas City region and welcomes your input. For more information or to connect, contact

Contact the team at Amp Up for the Future.