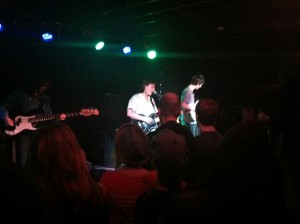 Angel Olsen’s set at Kansas City’s Riot Room in Westport was one of blissful contradictions. Before the show even began, Olsen asked for “a little more vocals,” as if her spring-loaded cannon of a voice needs extra amplification. In between tales of lost time and vacant lovers, she warmly asked for a beer with an “appreciate ya” attached to the end. Fuzzed-out brawlers and barely strummed wailers managed to coexist in the same intimate space. Similar to her terrific second LP Burn Your Fire For No Witness, Olsen’s set was both bristly and tender.

It was the tenderness that captivated the crowd first. Soft splashes of tambourine accompanied opener “Free”, which found Olsen keep her fingers tightly crossed for “pure love.” While “Hi-Five”‘s rural trod picked up a few paces, Olsen continued to ruminate on making a lasting connection. “All I ever need is someone out there to believe,” she lonesomely sang as the tightly packed crowd nodded along. Whatever dark alley she wandered down, the audience was eager to follow. And few roads were as pitch-black or rocky early on as “Drunk And With Dreams.” Olsen nearly shred her voice to promise “I’ll be the one, I’ll be the one,” each facial shiver making the promise seem more real.

For someone so frequently guarded in song, Olsen’s on-stage presence was remarkably candid. She gave tips on fiscal beer drinking: the higher the alcohol content the less you have to drink and offered Duchess Sour is “how I feel about myself some time.” As the night continued, that openness spilled over into the band’s songs. Rather than whisper what song should come next, Olsen half-yelled “you wanna do “Forgiven/Forgotten”?” to her guitarist. Even with the cat out of the bag, the Burn Your Fire For No Witness-highlight still bulldozed the enthusiastic crowd and wracked Olsen’s voice as she screamed “I don’t know anything, but I love you.”

Such transparency is what allows for a song like “Miranda” to exist. Whether or not it’s an autobiographical tale is irrelevant, constructing a song around a partner’s knowledge their other half is with another is devastating enough. Throughout the course of the entire night, the 2012 track came closest to pure country. When Olsen asks “what lover is waiting up for you tonight,” the question keeps up the embattled tradition of Patsy Cline and Loretta Lynn. Further clawing, she slowly realizes every nice thing that was said may have been a white lie.

Songs such as foot-stamper “High And Wild” and “Sweet Dreams” helped to temporarily ease these sobering realizations. The latter stole into a world of reverie, a world where warped, flanging guitar was more mushroom-fed than whiskey gulping. In “Tiniest Seed”, brushed drums painted Olsen’s tortured references to time in a warmer light.

But some things can only be avoided for so long and by the time her band left her alone on the dark stage, it was becoming clear which half of the contradiction had won out. Save for one lone wolf, everyone in the audience looked dead ahead as Olsen delivered an astounding version of “Unf***theworld”. When she warbles “I wanted nothing but for this to be the end,” it’s one of the most arresting musical moments of the year. An old manner insists “begging is undignified,” though Olsen imbues the indignity with tremendous courage. In that instance, the breathless crowd wasn’t intently focused on Olsen because she was the last one standing. Like Olsen, they were praying for peace of mind.

Middle of the Map Festival Day 2, The 2016 Edition

Day 2 of the Middle of the Map Festival this year was even better than the night before.  We caught... read more

Contact the team at Angel Olsen Live at the Riot Room.