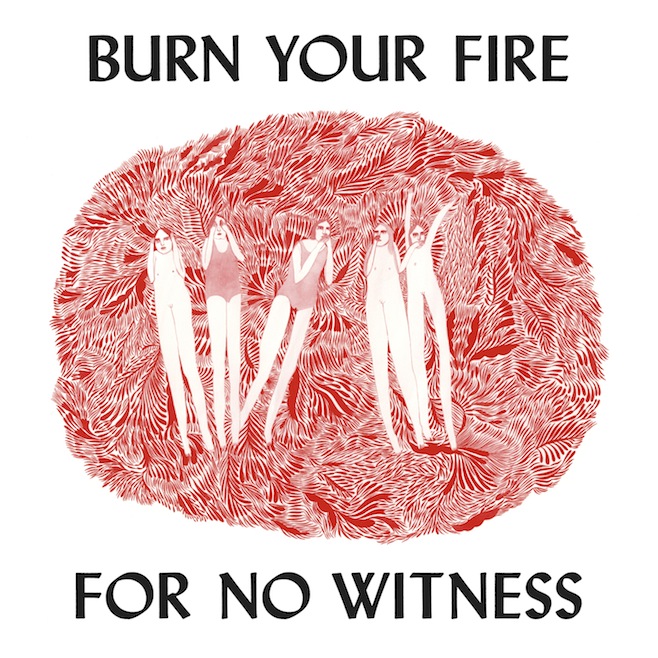 There’s a piece of conventional folk wisdom which posits “smaller scorpions are more dangerous than the large one,” and while the legend has no logical grounding, it’s continued to linger around in our collective conscious. So much so that Indiana Jones doled out the advice. In zoology, it’s akin to colossal elephants cowering in fear when confronted by a mouse. They leave “craters” in the ground, but they scurry away themselves upon seeing a tiny white fuzzball. Though these anecdotes seem disparate, they’re part of the larger notion that big things come in small packages.

Indie-folk singer Angel Olsen’s Burn Your Fire for No Witness is the latest example of this phenomenon. Even at its bristliest, there’s an unmistakable tenderness to Olsen’s sophomore LP. Behind massive walls of fuzz “Forgiven/Forgotten” Olsen warbles “I don’t know anything, but I love you.” Subtract the jangle and driving percussion, you’re left with a romantic equation. Second single “Hi-Five” performs a similar concealment; spiky guitars raise hell, barrelhouse piano trots around, and Olsen dips into the muddy waters of honkytonk. However, it’s the “Tear in My Beer” Hank Williams variety, where libations won’t submerge broken heart. Shaky, Olsen demands “all I need is someone out there who believes” and by her tone it’ll never happen. “High and Wild”s facile chug paves over the maudlin end-road to “your spirit’s disappeared.”

Not all of Burn Your Fire for No Witness goes to such great lengths to hide the high-stakes. “Stars” immediately crystallizes into a faux-Spoon groove to request a larger voice. Not to expose any human rights violation, simply to exhort “we exist.” In an instant, you know “White Fire”s death-blues carries tremendous weight. “Everything is tragic, it all just falls apart” Olsen whispers from a desolate plain. Calm summers can’t hope to right the sinking ship she’s boarded. To Olsen, trying to find love in such dire straits amounts to “burning your fire for no witness,” a desperate act done in solitude.

Necessity being the mother of invention, sometimes desperation can be a Godsend. Olsen finds a paradise hiding in between strokes of brushed drums in “Iota.” A cynic would note speculation rules and they’d be right, if not for Olsen citing time. As much as it ravages, time is an opportunity creator. Elegiac organ in closer “Windows” stretches time to its extremes. A withered Olsen demands “what’s so wrong with the light?” Hiding in the shadows is no longer working as a life-choice and she’ll leap out of a window to escape them. The song’s final push, aided by rousing drum fills, relates to the moment in a relationship when one person realizes it’s over. Instead of prolonging the suffering, they cut ties forever because some things time can’t heal.

Often this decay can be spotted from a mile away. You’ll constantly think “this can only work for so long” and soon your fears are confirmed. Burn Your Fire for No Witness occupies this depressingly predictive realm. In the album’s first chorus, Olsen’s admitting “I lost my dream,” wanting an end to come swiftly. Given enough time a fire will always die out. No amount of knowledge (folksy or otherwise) can stop that.

Back on Nov 15, we caught the early show featuring Mountain Sprout at Davey's Uptown.  It was a good sized... read more

Contact the team at ‘Burn Your Fire for No Witness’- Angel Olsen.