KKFI 90.1 FM will begin broadcasting Al Jazeera English’s NEWSHOUR on Thursday, May 2, 2013. NEWSHOUR is a 60-minute, award-winning radio news magazine made available to KKFI through our affiliation with the Pacifica Radio Network. KKFI is the only broadcast outlet within 500 miles to air the news program. KKFI will air Al Jazeera English’s NEWSHOUR Thursdays at 9:00 am Central Time right after Democracy Now.

Al Jazeera English has received numerous international awards for news coverage, and KKFI is pleased to include it as a complement to our diverse mix of over 40 different news and public affairs shows.

KKFI is committed to offering listeners an array of perspectives. The station accomplishes this by broadcasting programs and voices that are underrepresented or difficult to find elsewhere on the airwaves.

KKFI’s has made additional program schedule changes. The latest schedule can be found online at http://kkfi.org/on-air-guide/program-schedule/.

Tune in to Al Jazeera English’s NEWSHOUR, Thursdays from 9:00 to 10:00 am Central Time on KKFI 90.1 FM Kansas City Community Radio.

First steps are underway! We are very excited to get these upgrades in place at KKFI.  We have had to... read more

Thank you to all of you who came by KKFI Studios on Leap Day 2020! While we were having fun... read more

Thank you to all of you who came by KKFI Studios! We enjoyed the KKFI Studio Tours with Ebony Johnson... read more

Thanks so much to all those who attended our 2nd Annual Sustainers Concert, the KC Latin Music Summit. A huge... read more 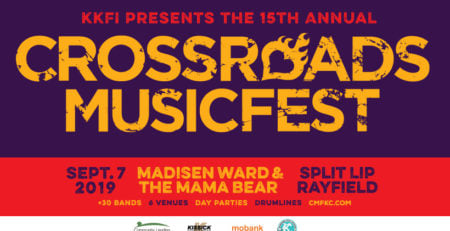 Welcome one and all to the latest version of KKFI online. Some of the New and Improved Features Entire Website is... read more