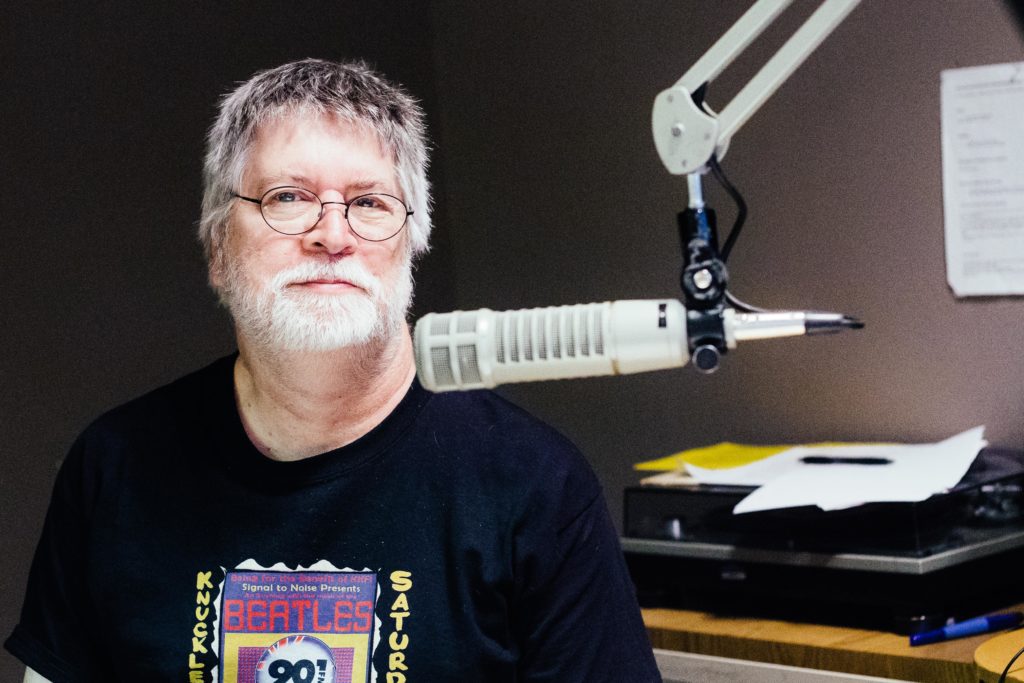 I started with KKFI in April of the station’s first year of broadcasting! I am the host of “Signal to Noise,” a free-form radio show that accepts and explores all genres of music. Each show is different. Sometimes, I even have a guest co-host. I like to put emphasis on artists and songs not often heard on the radio. I also do concert shows wherein the artists have an hour to play and talk and do what they want without interruption.

I have had many national and local guests, including Townes Van Zandt, Kevin Ayers, the Iguanas, Tom Russell, Del McCoury, Rosie  Flores, Ian Matthews, and many others. I have also had many local artists play live on the show.

I have long believed in community radio. It is the purest form of radio-grassroots and locally based. Community radio is all about people with a deep knowledge and passion for music being given the freedom to express themselves on the air. I program for people with wide, eclectic tastes who like to explore the musical realms.

Each show is another journey and is programmed as if it were a whole work, not just songs strung together.

Barry is a part of KKFI’s rich history…

I started in 1986, a couple of years before we went on air! I did bingo games to fundraise, passed out questionnaires on the streets, began collecting LPs for the KKFI’s library, and other assorted tasks to help get the station on the air.

In 1988, I started broadcasting every other Tuesday on KKFI with a show called “Matrix,” practicing what I called at that time “sonic archeology.”

I decided to do a free-form radio show wherein I could play everything from John Coltrane to the Dead Kennedys in the space of two  hours.  About ten years into the show I changed the name to “Signal to Noise” because the word “matrix”  seemed to have permeated the popular culture. Over the years, I have done literally thousands of radio shows and, after many time slot changes, it now resides at 8 PM on Sunday nights.

Free-form radio inspired by the free-form experiments of underground radio in the mid to late 60s, although I play much more than just rock and roll. This program is dedicated to the proposition that all good music transcends it's genre and is just as relevant today as it was in 1930, for instance. On Signal To Noise you're likely to hear anything from Charley Patton to Super Furry Animals. The trick to free-form radio is to blend different styles of music from different eras and make it sound not only natural, but right.