Bolton Threatens ICC Over Probes Into US War Crimes; and Protect The Protest Coalition Launches To Fight Against SLAPPs

Bolton Threatens ICC Over Probes Into US War Crimes; and Protect The Protest Coalition Launches To Fight Against SLAPPsJeff Humfeld2018-09-24T09:09:27-05:00

Bolton Threatens ICC Over Probes Into US War Crimes

On September 10, 2018 in Washington DC, President Donald Trumps national security adviser John Bolton gave an important and widely publicized speech to the rightist Federalist Society threatening International Criminal Court judges and court personnel if they dared to probe into the USAs torture practices in Afghanistan and three European black sites. The United States is being investigated for torturing captives in Afghanistan, Poland, Estonia, and Lithuania. The charges have been documented by the U.S. Senate in its report of December 14, 2017.

The International Criminal Court, the ICC, is also investigating Israeli war crimes in Gaza where in 2014 3000 people including over 500 children were killed by Israeli invaders. This has been documented by the United Nations Goldstone Report.

Bolton said that the United States will use any means necessary to protect our citizens and those of our allies from unjust prosecution by this illegitimate court including tariffs and prosecution.

He added that if the court comes after us, Israel, or other allies we will not sit quietly.

Bolton also announced that the US is shutting down a Palestinian diplomatic office in Washington because Palestinians have indicated that they will request that the ICC prosecute American ally Israel for war crimes and crimes against humanity.

In addition, the United States has cut off payments to the United Nations organization that has provided funds for refugees displaced by Israel when it conquered Palestine in the 1948 war. The funds were used for schools and hospitals in the West Bank and Gaza.

Guest – International Human Rights Attorney Reed Brody, a former colleague Michael Ratner, Brody has spent much of his career prosecuting international war criminals for crimes that the International Criminal Court investigators are contemplating with respect to the United States and Israel.

Protect The Protest Coalition Launches To Fight Against SLAPPs 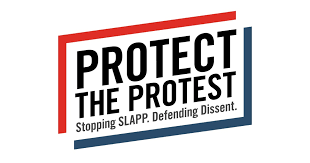 Anti-corporate sentiment in the United States of America is getting increasingly wide and deep. This is especially true when it comes to corporate responsibility for environmental degradation.

The most spectacular example of this is the nationwide mobilization in support of the water protectors at Standing Rock a year ago.The Energy Partners Transfer Corporation was attempting to build a pipeline through land sacred to native peoples in North Dakota. The pipeline went under the Missouri River threatening the water supply.

One of the many organizations supporting the Water Protectors was Greenpeace . As a consequence, they were sued by Energy Transfer Partners and accused of racketeering under the RICO act, a law originally passed to be used against organized crime.

The suit was designed to tie up the resources of Greenpeace , harass them, and cost them money. The lawyers for the corporation are the same firm used by Donald Trump.These legal actions by big corporations are called SLAPP suits. This stands for Strategic Litigation Against Public Participation.

In recent times these lawsuits have been proliferating. Two weeks ago 18 organizations including the Center for Constitutional Rights banded together to fight back.

Guest – Attorney Deepa Panmanabha,the assistant general counsel with Greenpeace since 2011 and is based in Washington DC. Deepa is involved in defending Greenpeace against two lawsuits attempted to silence the organizations advocacy work brought by Resolute Forest Products and Energy Transfer Partners.She also advises on a variety of legal matters and managers criminal law cases where green peas after this engage in civil disobedience.Deepa represents Greenpeace USA in the Protect the Protest Task Force, a recently formed coalition created to confront corporations that file lawsuits design to silence dissent and provide resources to individuals and groups facing these suits.

Contact the team at Bolton Threatens ICC Over Probes Into US War Crimes; and Protect The Protest Coalition Launches To Fight Against SLAPPs.