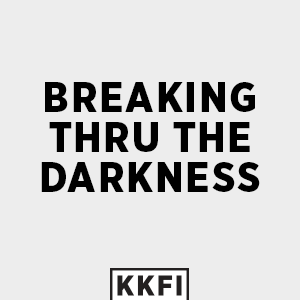 A Spanish alternative rock and pop, with interviews, local artists and bands. The show ends with five minutes of Latino News in Spanish

Preempting Taste of Tejano and Breaking Through Darkness on on Tuesday Nov. 3rd will bring you up to the minute coverage from Democracy Now! and KKFI News & Public Affairs Hosts.

THE LOVE THAT MOVES THE SUN AND OTHER STARS*

Written and Directed by Karen Lisondra

Democracy Now! will cover results from the presidential election to congressional and state races, as well as ballot initiatives.

Democracy Now!’s election night special will feature interviews and perspectives that you won’t hear anywhere else. We’ll include the voices of activists, analysts and grassroots leaders discussing how the movements on the ground will go forward following this historic election.

Covering the local election in our listening area.