The First Amendment, Separation of Church and State

On the final day of the Supreme Court term last week, Justice Elena Kagan said that conservatives are weaponizing the First Amendment and turning it into a sword.
Many on the left who once held absolutist views on free speech are realizing that certain court victories may actually bring harms to women, or gay and lesbian couples and others, rather than advancing their causes. The same is true with some cases involving religious freedom.

The Washington, DC-based group Americans United for the Separation of Church and State says, in part, on its website that:Religion is often used as an excuse to discriminate against LGBTQ people, women, religious minorities, non-believers and others. Some want to use their religious beliefs as an excuse to deny health care, refuse to provide goods and services, and disobey laws protecting Americans from discrimination.

Guest – Richard Katskee, Legal Director at Americans United for Separation of Church and State. Richard has litigated First Amendment cases in appellate and trial courts throughout the country, including challenging creationism in the public schools, religiously based discrimination against same-sex couples, the presentation of official prayer at governmental meetings and functions, and the provision of federal funding to faith-based organizations. He is a Woodrow Wilson Visiting Fellow and a regularly speaker at universities and legal, educational, and scientific associations across the country. 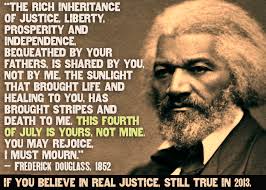 Last week an Alternative 4th of July celebration in NYC commemorated Frederick Douglass and his Independence Day Speech at the Rochester Ladies Anti-slavery Society in 1852.

The event was organized by poet Raymond Nat Turner, who has been a guest on Law and Disorder, and held at the NY Chapter of the National Writers Union on July 3, 2018.

The celebration included performances by UpSurge! NYC, solidarity poems, and Frederick Douglass readers Ralph Poynter of the Lynne Stewart Organization and the New Abolitionist Movement, Margaret Kimberly from the Black Agenda Report, Diane Ward form the NWU Steering Committee and our own Heidi Boghosian.We are pleased to bring you some of the music, poetry and the readings.

Contact the team at The First Amendment, Separation of Church and State; and Alternative July 4th celebration commemorates Frederick Douglass.