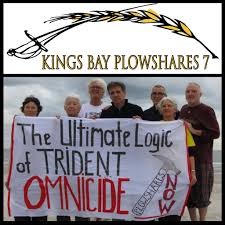 In our society, nuclear weapons that can destroy all creation are taken as a normal, even an inevitable part of life. In a dramatic action to break what they call the crime of silence seven Catholic peace activists entered the Kings Bay trident submarine base in Georgia last April to perform an act of symbolic disarmament. They used hammers to follow the prophecy of Isaiah to beat swords into plowshares and poured blood to make holy what was evil in a sacramental action. Kings Bay is homeport to six ballistic missile trident submarines, each of which deploy 16 trident missiles carrying four or more warheads of at least 100 kilotons. The Hiroshima bomb was 14 kilotons. Each submarine thus has the destructive power of at least 500 Hiroshima bombs. The plowshares seven face up to 25 years in federal prison. Their trial is coming up. Theirs was the latest of 100 plowshares actions around the world since 1980. 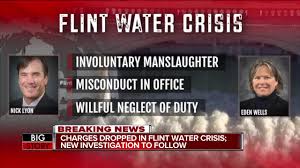 The notorious Flint, Michigan poison drinking water case has been in litigation for more than three years. Detroit constitutional attorney Bill Goodman joins us to give an update on the case.

Former Michigan Governor Rick Snyder, high-ranking former members of his staff and other state employees are the target of a federal civil rights lawsuit over the city of Flints water crisis. The lawsuit, which also targets the city, alleges that the officials tried to balance the Citys budget through a pattern of devious and race-based activity that targeted the people of Flint. It claims that these public official lied to the people of Flint by continuing to mail water bills to Flint residents, which they allege fraudulently misrepresents that the city is providing safe, clean water to its residents.

A group of Flint residents filed the lawsuit on behalf of all the citizens of Flint seeking financial compensation for injuring virtually every adult and child in that beleaguered city ” for lead poisoning and brain damage to the kids, for severe skin ailments and hair loss for everyone, for death from Legionnaires disease, and countless other injuries; in addition, there had been tremendous psychological injury to the entire population. Beyond that, people in this community have sustained massive property damage, loss of business, and financial losses. In addition to compensation, they demand life-time future medical care.

This case asserts that this disaster was caused when a multitude of public officials decided to change the source of water from clean safe water, to dangerous, untreated water, knowing ” at all times of the danger ” and yet lying to the public and claiming that they water was safe when they knew that it was dangerous and poisoned.

We will also speak with him about his lawsuit against a private prison corporation for negligence in allowing a gang execution in one of the private prisons it owns. Attorney Goodman is counsel to the inmates at the Wayne County, Michigan jail in the oldest jail conditions case in the United States going back to 1971. Detroit is in Wayne County.

Guest -Attorney Bill Goodman is the former Legal Director at the Center for Constitutional Rights and a past president of the National Lawyers Guild. He is the attorney for a number of victims of water poisoning in Flint, Michigan.