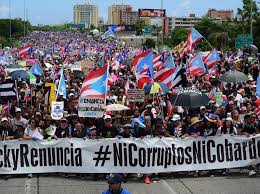 President Donald Trump’s recent attacks on four congresswomen, people of color, telling them to go back home echoes the dehumanizing demagoguery of fascist strong men who use race baiting to scapegoat and divide and conquer. Victimizing Latinos has been a strategy of Trumps ever since the election when he called Mexicans criminals and rapists.

After Hurricane Maria wrecked the American colony of Puerto Rico in 2015 killing nearly 3000 people and severely damaging the electrical grid Trump went to San Juan where there wasn’t much more than Trump throwing paper towels at people.

Guest – Attorney Natasha Bannan, former National Lawyers Guild director.She currently works as associate counsel at the New York City-based Latino justice. She graduated from CUNY Law School where she was editor in chief of the CUNY Law Review. She wrote an article for this journal called Puerto Rico’s odious debt: the economic crisis of colonialism. She is on the Board of Directors of the Center for Constitutional Rights. 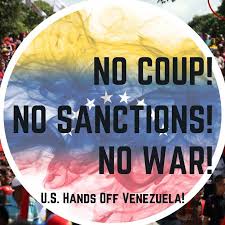 The US had attempted to install Juan Guaido as the president of Venezuela and on May 30th rightwing coup supporters attempted to take over the Venezuelan embassy in Washington DC. This coincided with another attempted coup by Juan Guaido in Venezuela. Guaido’s failed in his coup attempt.

The embassy in Washington, DC is the property of Venezuela and under international law the United States must protect and is not allowed to enter it.

A group of Americans known as the Embassy Protection Collective moved into the embassy to prevent its hostile takeover. Up to 70 people were sleeping in the embassy as embassy protectors.

The State Department, Secret Service, and the Metropolitan police force allowed a pro-coup mob to lay siege on the embassy. People were blocked from entering the embassy. Food was prevented from being brought in. The electricity and water were cut off.

Although the coup against the Maduro government failed, the Embassy Protectors were arrested when the US government raided the Venezuelan embassy. The final four Embassy Protectors, Kevin Zeese, Margaret Flowers., Adrian Pine, and David Paul were arrested and face federal prosecution. If convicted they could be imprisoned up to one year and fined up to $100,000 each.

Guest – Kevin Zeese is a US lawyer and political activist. He helped organize the 2011 Occupy encampment in Washington DC. Kevin Zeese is currently the co-director of The Organization Popular Resistance.