Legislation Criminalizing Protests; and Affordable Prescriptions And The CREATES Act

Throughout the nation, a rash of new bills are being introduced that increase the criminal penalty for the act of protesting. They have been in part inspired by the high-profile protests at Standing Rock, and also by model legislation drafted by the conservative and influential American Legislative Exchange Council. ALECs bills are designed to protect corporate interests. A new report from Greenpeace USA reveals how Energy Transfer Partners or ETP, the company behind the Dakota Access pipeline, with the fossil fuel industry, lobbied for legislation aimed at restricting and criminalizing protest. The report finds abuses on human rights, freedom of speech and faulty operations from the company.

ETP practices are destructive for the planet, for communities and for the health of democracy in the US. They have hired private security firms that surveil and infiltrate activist groups, advocated for laws that restrict the right to protest, or moving forward with pipeline projects against the will of Indigenous people and landowners, ETP is the poster child for unchecked corporate power. Annie Leonard, Executive Director at Greenpeace USA calls their projects lightning rods for controversy.

The report, Too Far, Too Often: Energy Transfer Partners Corporate Behavior On Human Rights, Free Speech, and the Environment, details how ETP lobbied for anti-protest legislation. It also shows how the company uses the courts and Strategic Lawsuits Against Public Participation (SLAPPs) to intimidate opponents of the Dakota Access pipeline project. In August 2017, ETP sued Greenpeace entities and others for USD $900 million, using RICO laws to claim that a collection of environmental groups and Indigenous allies constituted a criminal enterprise. 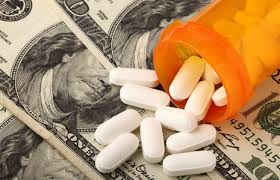 It is estimated that the United States spends more than $500 billion dollars on prescription medicines each year. Total spending on drug therapies is about $371 billion dollars, including over-the-counter drug remedies, valued at 31 billion. A poll by the Kaiser Family Foundation found that 76% of Americans overall ” and across party lines ” say their top health care priority is ensuring that high-cost drugs for chronic conditions, such as HIV, hepatitis, mental illness and cancer, are affordable.

In a long overdue move, the U.S. Senate Judiciary Committee recently voted to advance the CREATES Act. It would prevent prescription corporations from abusing regulatory rules to deny generic medicines and biosimilar manufacturers access to product samples that allow these groups to obtain U.S. Food and Drug Administration approval and bring affordable products to market.

Corporations have long used this practice to delay the introduction of price-lowering generic and biosimilar competition. Brand-name manufacturers use it to inappropriately extend their monopolies. The Act aims to curb these abuses and promote competition. The U.S. Congressional Budget Office claims the Act will save $3.8 billion over the next 10 years.

Americans overwhelmingly support disciplining Big Pharma to help rein in pharmaceutical prices. The DC based group Public Citizen says that the CREATES Act begins to do that and cites it as a key structural reform that we can pass this year. It urges Congress should pass this legislation without delay.

Guest – Steven Knievel, Steven Knievel is a researcher and campaign organizer with Public Citizens Global Access to Medicines Program. He works with governments and public interest groups around the world to promote the use of flexibilities in patent and trade rules to promote access to medicines for all. He also works to mitigate the deleterious effects of corporate influence in trade negotiations on public health.

Contact the team at Legislation Criminalizing Protests; and Affordable Prescriptions And The CREATES Act.