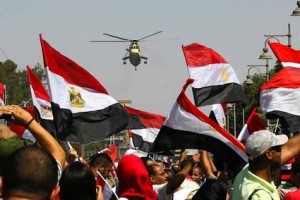 epa03802269 An Egyptian army helicoper hovers as Egyptian opponents to ousted president Mohamed Morsi gather at the presidential palace in Cairo, Egypt, 26 July 2013. Egyptian authorities on 26 July ordered ousted president Mohammed Morsi to be detained for 15 days pending further investigations on charges of conspiring to carry out ‘hostile acts’ in the country, reported state-run newspaper al-Ahram online. Morsi’s backers and opponents were, meanwhile, rallying for rival demonstrations across the country, mainly in Cairo. Scores of anti-Islamist activists were turning out at central Cairo’s Tahrir Square in response to a call made by army chief Abdel-Fattah al-Sisi, who engineered Morsi’s ouster. The Islamist group’s followers were also on 26 July flocking to the area of Rabaa al-Adawiya, in north-eastern Cairo, joining many others who have been camping there for weeks to protest what they call a military coup against Morsi, Egypt’s first democratically elected president. EPA/KHALED ELFIQI ** Usable by LA