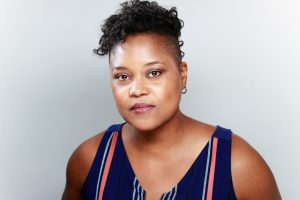 It is the third Saturday of the month and time again for Show People on The Tenth Voice. Join host Michael Grayman-Parkhurst as he welcomes actor, singer-songwriter and playwright Tiff Barbour to the program.  This is a re-airing of an earlier show as Michael is not available today, but he wanted to share with everyone the wonderful Tiff Barbour again and let everyone know that 1776, one of the shows that they talked about, is back in rehearsals and will premiere at the American Repertory Theatre in Cambridge, MA, on May 17th before opening on Broadway in September.

Tiff Barbour is an actor, singer-songwriter and playwright. She plays Andrew McNair in the upcoming all female/non-binary Broadway revival of the musical 1776 directed by Tony-Award winner Diane Paulus. She has co-starred on HBO’s The Leftovers, Law & Order and The Education of Max Bickford. Tiff starred in the short film Rabbit which premiered at The Sundance Film Festival.  She has performed regionally at Baltimore Center Stage, Philadelphia Theatre Company and North Shore Music Theatre to name a few and made her playwriting debut with her one-act entitled End the Cycle.

Join us this Saturday at 1pm.