This was the Trump administrations latest snub of the international community. The Human Rights Council is tasked with spotlighting and approving investigations of suspected rights abuses. Never before has a member dropped out voluntarily. Diplomats and activists say that US ambassador Nikki Haley was the driving force behind the decision.

Efforts by the United Nations ambassador Haley to end or water down the routine scrutiny of Israel has failed in recent months at the United Nations General Assembly in New York. The Human Rights Council addresses and array of concerns including discrimination, freedom of expression, the rights of women, LGBT people, and people with disabilities.

Haley declared that We are withdrawing from the United Nations Human Rights Council, an organization which is not worthy of its name.

Guest – Phyllis Bennis is a fellow of the Institute for Policy Studies, where she works on anti-war, US foreign policy and Palestinian rights issues. She has worked as an informal adviser to several key UN officials on Palestinian issues. Her books including Calling the Shots: How Washington Dominates Today’s UN, and Understanding the Palestinian-Israeli Conflict. 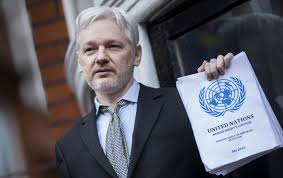 WikiLeaks founder the truth telling publisher Julian Assange is in escalating danger of being sent from England to America where he would likely be tried for espionage, a crime that carries the death penalty.

Assange and WikiLeaks have revealed American war crimes in the middle east, CIA global machinations , and the work of Clinton Democrats in preventing the popular Bernie Sanders from heading up the party ticket.

Assange is presently holed up in the Ecuadorian embassy in London where he was granted political asylum six years ago by past leftist president Rafael Correa. But now, with the change of presidents in Ecuador, Assange has been cut off from the outside world. He has no phone, no computer, and no visitors.

The fresh offensive against him occurred the day after American General Joseph DiSalvo, the head of the US Southern Command, the Pentagons arm in Latin America, visited the new right wing Ecuadorian President Lenin Moreno.Moreno has said that Assange is an inherited problem and is seeking s better relationship with the United States government, to whom he has already granted a military base.

Guest ” Mark Crispin Miller who is a professor of media studies at New York University. Professor Miller has frequently spoken about media propaganda, the engineering of consent for empire, fake news, and the destruction of the independent press.He has been awarded a Guggenheim Fellowship for the humanities and is a vigorous defender of Julian Assange and WikiLeaks.