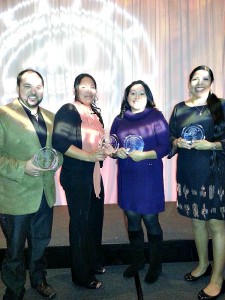 Congratulations to NAJA members (pictured left to right above) Jason Salsman, Christina Good Voice, Shannon Shaw-Duty and Rhonda LeValdo who were honored November 16 at an awards ceremony in Tulsa, Okla.

Rhonda LeValdo, host of the radio show “Native Spirit Radio” heard Sundays at 5 PM on KKFI 90.1 FM, was recognized by the National Center for American Indian Enterprise Development (NCAIED) for her leadership and contribution to Native American life. Four members of the Native American Journalists Association were recognized at the Native American 40 Under 40 reception in Tulsa, Oklahome, at the Cherokee Nation Hard Rock Hotel and Casino.

In honor of its 40th anniversary in 2009, the NCAIED introduced the Native American 40 Under 40 to recognize emerging American Indian leaders between the ages of 18 and 39 “who have demonstrated leadership, initiative and dedication to achieve significant contributions business, communities and Indian country,” states a NCAIED press release.

Rhonda has produced and hosted Native Spirit Radio on KKFI since 2003, which airs every Sunday at 5:00 pm Central Time on KKFI 90.1 FM. The show features a Native news segment and plays traditional and contemporary Native American musicians such as Blacklodge, Youngbird, Keith Secola, and Savage Family. LeValdo has interviewed notable Native Americans on the showing, including Mark Trahant, Vine Deloria, Suzanne Harjo, Elizabeth Cook-Lynn, Edward Valandra, and James Riding In.

Rhonda is currently the President of the Native American Journalists Association and an active member of the faculty at Haskell Indian Nations University in Lawrence, Kansas. For a report on Rhonda’s work see this article from 2010.

From the whole KKFI family – congrats on your contribution to community radio and Native American society!

Photos: KKFI Day at the Roasterie

This is the KKFI Jazz Event Calendar for the week of Monday, March 16th to Sunday, March 22nd. This... read more

This is the KKFI Jazz Event Calendar for the week of Monday, November 30th to Sunday, December 6th. This... read more

This is the KKFI Jazz Event Calendar for the week of Monday, July 9th to Sunday, July 15th. This... read more

This is the KKFI Jazz Event Calendar for the week of Monday, December 28th to Sunday, January 3rd. This... read more