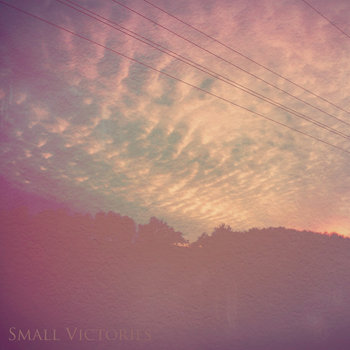 Post-rock isn’t an easy genre to carve out your own niche in. Too pulverizing and you’ll immediately be lumped in with Swans’ apocalyptic racket. If you opt for a tense, jittery sound you’re bound to be thrown into the same abandoned quarry Slint floats in. Attempting to conquer death with skyward guitars and voluminous drums will put you right in line behind Godspeed You! Black Emperor. Even mellowing out and doing some inward exploration risks unfair Tortoise comparisons. In short, there’s no winning when it comes to operating in the post-rock genre.

Which is precisely what makes Kansas City artists Chris Shelton’s Small Victories EP so revelatory. I think of every one of those aforementioned bands when I see “post-rock” as a genre tag, but the music itself doesn’t force me to make comparisons. In fact hearing “Homework”‘s limpid guitars lines appended to a calm drum pattern, makes the comparison game nearly impossible. I can’t or don’t want to think about anything. Instead I’m far more comfortable kicking my feet up and staring endlessly out my window. The song’s dulcet background woos mirror the sigh of contentment you let out while enjoying something simple.

Not that Small Victories can be defined solely by its simplicity. As leisurely as Shelton’s guitar playing in the closing title-track sounds, it’s actually an involved latticework of tremulous runs and reverbed hiccups. Not unlike Real Estate’s sun-drenched “Talking Backwards” from earlier this year, it proves how much work goes into relaxation. A truism equally applicable to “Indigo Folds”‘ desert crawl. Though the guitar does considerably more sidewinding and the drums splay across the track, you get the sense that soon enough they’ll lay back down on some rolling hill and peer up at the stars.

If the nature references come across as trite or navel-gazing, they’re not meant to. There’s just an ease to this EP that could rarely be found in urban sprawl. Nothing, not even the flitting solo of “Parachutes” sounds anxious or confused. With Small Victories, Shelton has paved his own lane and taken his time doing it.

(You can find Small Victories as a “Name Your Price” album on Bandcamp.)

Here's a few shots from the Electric Lungs set a couple of weeks back at miniBar:             See more music events and... read more

On new single "Think Like A Machine, Not A Boy", the Flaming Lips, struggle continues, but they're finally showing some... read more

On mini-album "Fade Away" Best Coast balance between their ragged debut and carefully considered follow-up, while attempting to evade cries... read more