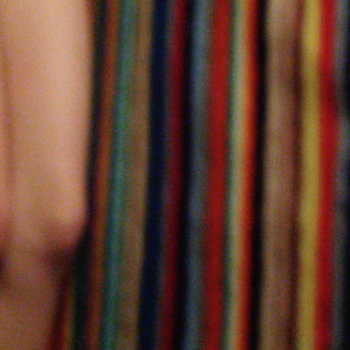 There’s little to no information about lo-fi/experimental Kansas City band Merriweather and that mysteriousness makes all the difference. This sprawling, but cozy music could’ve come from any number of ill-lit bedrooms around the country. It’s not only region-defying though, it’s anachronistic. Guitars tremble and snake in 90s Godspeed You! Black Emperor fashion. At times they jangle and recall 60s surf-pop, as the bass slackly walks like it’s still dealing with sea legs. Gurgling synthesizer culled from a Pink Floyd space expedition travels to the year 2014.

But that out of step walk with the times wouldn’t matter if the music failed to captivate, something “Stained Glass & the Dark Cathedral” does unencumbered. The faint whirr at the beginning of the track acts as a sort of hypnosis, luring you into a world where everything is best defined in non-specific terms. Guitar strings will “squeak” after too much tremolo. That “gurgling” synth whooshes after over-use. When bass does emerge from these murky waters, it prattles for a brief moment before re-submerging. The only constant is the “faint whirr” in the background. As Nate Fisher famously said in Six Feet Under, “everything – death, life, everything – it’s all completely suffused with static.” No matter where you hail from, it’s inescapable.

"The wraith-like voice is a pure Burial affectation; the sound of a withering 90s R&B sample echoing throughout an empty... read more

Much of Hesitation Marks turns the heat on the towering inferno down, until only a flickering blue pilot light is... read more

Contact the team at “Stained Glass & the Dark Cathedral”- Merriweather.