The Board meets on the fourth Wednesday of the month.

If you would like to apply for a position on the KKFI Board of Directors, please fill out this application.

Click image to learn more about roles of KKFI Board members. 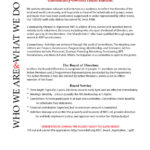