The Decline And Fall Of The American Empire; Autonomous Weapons Systems And Laws of War; and Supreme Court On Partisan Gerrymandering And The Census Question

The Decline And Fall Of The American Empire; Autonomous Weapons Systems And Laws of War; and Supreme Court On Partisan Gerrymandering And The Census QuestionJeff Humfeld2019-07-14T08:09:32-05:00

The Decline And Fall Of The American Empire 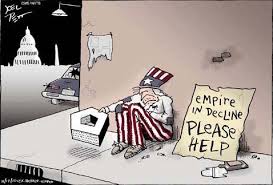 If a modern day Gibbons were to write about the decline and fall of the American empire she would surely feature Trumps bringing road crushing Abrams tanks and F15 fighter planes into Washington DC. Gibbons wrote about Julius Caesar who brought his imperialistic troops into Rome. To do so they had to cross the Rubicon river. This ended the Roman Republic. Today, July 4, 2019 symbolically marks the American crossing of the Rubicon. You cant have democracy at home and imperialism abroad. That was the lesson of Gibbons three volume history. But that wont be discussed on Fox and Friends so Trump will remain ignorant.
The rest of us should be scared. If there is a shattering event in our country those tanks and planes will be aimed at us.

The Pentagon is developing for future deployment a variety of autonomous weapons systems. They are known as killer robots.

They will be active in the air, on the land, and on the sea. Killer robot deployment potentially conflicts with the laws of war. The Navy, the Air Force, and the Army will all have them. The robots will use algorithms and artificial intelligence. Once deployed they can operate for months on their own, monitoring, selecting, and destroying targets, including people. CampaignToStopKillerRobots.org /Armscontrol.org

Supreme Court On Partisan Gerrymandering And The Census Question 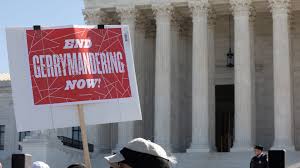 The underlying premise of our radio program Law and Disorder is in the words of our founder attorney Michael Ratner that democracy and the rule of law are increasingly becoming incompatible with capitalism and imperialism. A terrible example of this is the recent Supreme Court decision on partisan gerrymandering. The majority decision, written by chief justice John Roberts, was joined by his fellow four right wing pro-corporate authoritarian judges Thomas, Alito, Gorsuch and Kavanaugh.

In its unprecedented decision in Rucho v. Common Cause and Camon v. Bemusement Roberts wrote that supreme court would not get involved in election rigging matters, although majority rule is a foundation of American democracy.

In addition to gerrymandering, another anti-democratic strategy practiced historically in the US has been voter suppression. Most infamously, the Democrats did this during the Jim Crow era to prevent recently freed slaves from voting.

Currently the Republican Commerce Secretary Wilbur Ross attempted to suppress votes by including a citizenship question on the census, which occurs every 10 years, and which determines money allocations among other things.In this instance the Supreme Court recently ruled that the question cannot be asked.

Guest ” Attorney Marjorie Cohn, professor emerita at Thomas Jefferson School of Law where she taught for 25 years. The former president of the National Lawyers Guild and criminal defense attorney is a legal scholar and political analyst who writesbooks andarticles, and lectures throughout the world about human rights, US foreign policy, and the contradiction between the two. She has testified before Congress and debated the legality of the war in Afghanistan at the prestigious Oxford Union. Her columns appear on Truthout, HuffPost, JURIST, Truthdig, Portside, Alternet, CommonDreams and Consortium News,and she has provided commentary for CBS News, BBC, MSNBC, CNN, Fox News, NPR and Pacifica Radio. Her website ishttp://marjoriecohn.com/

Contact the team at The Decline And Fall Of The American Empire; Autonomous Weapons Systems And Laws of War; and Supreme Court On Partisan Gerrymandering And The Census Question.