The KKFI Racial Justice Initiative (RJI) is the newest addition to how KKFI strives to uphold its mission “to stimulate, educate and entertain our audience, to reflect the diversity of the local and world community, and to provide a channel for individuals and groups, issues and music that have been overlooked, suppressed or under-represented by other media”.

The RJI is a creative collaborative resource for challenging the status quo and elevating Black and allied voices to propel change.  We seek to serve as a community resource for unpacking and addressing systemic racism while also ensuring that KKFI operates with highest attention and adherence to the best practices in diversity, equity and inclusion. 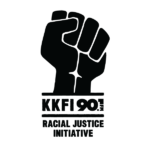 Ebony’s Bones – a kitchen table conversation that explores the souls of black folk, as we decolonize and question everything that we’ve been told to believe. Hosted Ebony M. Johnson along with historian and professor AJ Lowe.

One Struggle KC – Collective of Kansas City activists seeking to connect the struggles of oppressed Black communities, locally and globally

NAACP Kansas City – Ensure the political, educational, social, and economic equality of rights of all persons and to eliminate race-based discrimination

More2 – Rather than providing services or programs, we work to change policies through grassroots movements, in ways that promote racial and economic equity in Kansas and Missouri

The Community Remembrance Project of Missouri – In partnership with the Equal Justice Initiative (EJI), the Community Remembrance Project of Missouri (CRP-MO) was established by Missourians to work in coordination with communities throughout the state to raise public awareness, facilitate education, and work toward reconciliation regarding the state of Missouri’s history of racial injustice—in particular, its legacy of racial terrorism

Bruce R. Watkins Cultural Heritage Center – The mission of Bruce R. Watkins Cultural Heritage Center is to commemorate and interpret the African-American diaspora particularly in the State of Missouri, the City of Kansas City, MO, and its surrounding areas through fostering educational and cultural programs regarding the past, present and contemporary contributions of African Americans who served to shape the city and state’s history and culture. A major component of contemporary and future interests involves the conscientious development of the state environmental policies.

My Better America – A minority-owned organization focused on improving the Criminal Justice System, with emphasis on Law Enforcement and Court Procedures, that disproportionately impacts poor and low-income people of color

The Greenline Initiative – A social enterprise that renovates blighted homes in the urban core, while owner financing their sale using crowd sourced funds

Generating Income for Tomorrow KC – Create a clear path to economic prosperity and wealth for the African American community in Kansas City by providing grants to Black owned businesses in Kansas City, with a specific interest in businesses that operate in low income areas

Movement for Black Lives – a coalition of more than 150 orgs that aims to transform communities, policy, and culture

Just Mercy (2019) –  A biographical legal drama that tells the true story of Walter McMillian, who, with the help of young defense attorney Bryan Stevenson, appeals his murder conviction.

Freedom Riders (2010) – This film chronicles the story behind hundreds of civil rights activists called Freedom Riders that challenged racial segregation in American interstate transportation during the Civil Rights Movement. The activist traveled together in small interracial groups and sat wherever they chose on buses and trains to compel equal access to terminal restaurants and waiting rooms. They brought the ongoing practice of racial segregation in the southern United States to national attention.

Dark Girls (2011) – A documentary film that documents colorism within the African American community, a subject still considered taboo by many black Americans. The film contains interviews of African American women describing the role colorism has played in their lives, with notable African Americans detailing their experience. It also reports on a new version of the 1940s black doll experiment by Kenneth and Mamie Clark, which proved that black children had internalized racism by having children select a white or a black doll (they typically chose white) based on questions asked.

I Am Not Your Negro (2016) – This film is based on James Baldwin’s unfinished manuscript Remember This House. Narrated by actor Samuel L. Jackson, the film explores the history of racism in the United States through Baldwin’s reminiscences of civil rights leaders Medgar Evers, Malcolm X, and Martin Luther King Jr., as well as his personal observations of American history.

The Hate U Give (2018) – This film follows the fallout after a high school student witnesses a police shooting.  Based on the novel of the same name by Angie Thomas.

If Beale Street Could Talk (2018) – This film follows a young woman who, with her family’s support, seeks to clear the name of her wrongly charged lover and prove his innocence before the birth of their child. Based on the James Baldwin novel of the same name.

Queen & Slim (2019) – This film follows a couple on the run after their first date results in the killing of a police officer.

The Trial of the Chicago 7 (2020) – The Chicago Seven (originally Chicago Eight, also Conspiracy Eight/Conspiracy Seven) were seven defendants—charged by the United States federal government with conspiracy, crossing state lines with intent to incite a riot, and other charges related to anti-Vietnam War and countercultural protests in Chicago, Illinois during the 1968 Democratic National Convention.