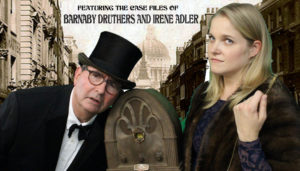 During Sherlock Holmes’ long absence from Victorian era London when the world believes him to have perished at Reichenbach Falls, an unlikely duo takes up the crime-solving mantle: Barnaby Druthers and Irene Adler! Barnaby Druthers, the unusual and often accidental British private investigator is here to solve mysteries in 100% new and original audio theater program that hearkens back to the golden age of story-based radio.

Join Devon Richtmeyer as Irene Adler and Humphry Rolleston as the affable Barnaby Druthers in these exciting and entertaining audio adventures. Are they up to the task? Find out!

A special audio theater program featuring the character Barnaby Druthers as he solves a mystery of a missing person's case in fountain city!  A new holiday classic episode written with the KKFI listeners in mind.