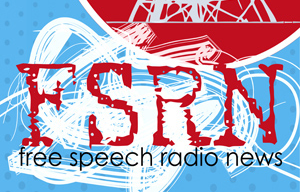 Tune into Headline News from Free Speech Radio News, one of the most respected sources of independent radio news in the United States and heard in more than 100 communities large and small from Nova Scotia to California, from Alaska to Florida. FSRN Headline News provides a daily newscast that calls on more than 200 reporters across six continents.

Free Speech Radio News is one of the most respected sources of independent radio news in the United States, heard in more than 100 communities large and small from Nova Scotia to California, from Alaska to Florida. FSRN’s daily newscast calls on more than 200 reporters across six continents. Often, they live in the communities they cover, amplifying the voices of people who are ignored and unheard in the corporate and government press.

Covering big stories as they affect real people.Free Speech Radio News covers the critical stories of our day – Obama’s first term in office, the economic meltdown, the wars in Iraq and Afghanistan.  It’s important to cover the actions of elected officials and decision-makers, but it’s equally important to show how those decisions affect real people – listeners like you. FSRN finds the real people in the top news items and highlight their stories.

Covering stories that are often left out of U.S. media. Free Speech Radio News finds important stories that aren’t being told elsewhere and brings them to your listeners. Stories that investigate social problems and abuse of power, stories that show the human costs of war and poverty.  But also stories that connect people and places, stories about people making positive change in their communities.