Every Thursday at 7:00pm

Thursday nights are special! This time slot is for new show auditions, timely current events story or a show from our archives. EXCEPT on 3rd Thursdays is Shots in the Night & on 4th Thursdays is River City Chautauqua

KKFI hosts Bill Clause and Greg Swartz interview Freedom From Religion (FFRF) co-presidents.  The two freethinkers explain why they are atheists and why FFRF works to remove all ties between government and religion. 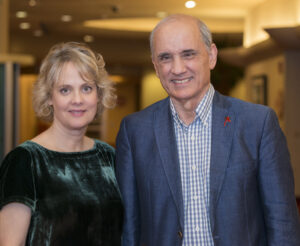 DAN BARKER and ANNIE LAURIE GAYLOR are co-presidents of the Freedom From Religion Foundation and co-hosts of Freethought Radio and Freethought Matters (TV). A former minister and evangelist, Dan became a freethinker in 1983. His books, Just Pretend: A Freethought Book for Children and Losing Faith in Faith: From Preacher To Atheist (1992) are published by FFRF. Other books include Godless (Ulysses Press, 2008), The Good Atheist: Living a Purpose-Filled Life Without God (Pitchstone Publishing, 2011), Life Driven Purpose: How an Atheist Finds Meaning, Pitchstone Press (2015), GOD: The Most Unpleasant Character in All Fiction (Sterling Publications, 2016), and Free Will Explained: How Science and Philosophy Converge to Create a Beautiful Illusion. A graduate of Azusa Pacific University with a degree in religion, Dan now puts his knowledge of Christianity to effective freethought use. A professional pianist and composer, Dan performs freethought concerts and is featured in FFRF’s musical CDs, “Friendly Neighborhood Atheist,” “Beware of Dogma,” and “Adrift on a Star.” He joined FFRF’s staff in 1987, serving as public relations director. He was first elected co-president in November 2004, speaks widely and has engaged in more than 100 debates about religion.

Contact the team at Thursday Night Special: Freedom From Religion Foundation–Governing Without God.