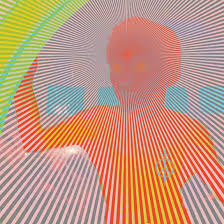 Even with releases by Kanye West and Nine Inch Nails vying for a spot as the bleakest, most oppressive offerings of 2013, the Flaming Lips’ latest LP stands head and shoulders above the rest. Yeezus featured a brief soulful detour by way of “Bound 2”, and Reznor’s work has the promise of remaining up-tempo as you careen over the cliff. The Flaming Lips’ last official studio album Embryonic had a host of feedback-laden freakouts to interrupt the existential crisis that had overtaken them. Meanwhile, The Terror possessed none of those qualities. For much of the album’s 55 minutes, they drifted further into the mire. Relationships crumbled and they only tried harder; unwilling or unable to see that the light at the end of tunnel had burnt out.

“Think Like A Machine, Not A Boy” (the first track to debut from their upcoming Peace Sword EP) retains the blaring synthesizer histrionics of The Terror, though it’s a single dark cloud speckling the landscape. Wayne Coyne’s voice can never fully offer comfort (that slight warble is tinged with uncertainty); nevertheless it’s the most assuring take we’ve heard from the frontman in some time. Coyne is in seeker mode as he strums away at an acoustic guitar, searching for a contaminant that’s poisoned his mind. Doubt is pervasive, however it’s not as defeating here. Coyne’s asking why and no longer is it an open-ended question. The struggle continues and they’re finally showing some fight.

The Peace Sword EP is out digitally October 29, and will make a CD/vinyl run November 29 through Warner Brothers. Listen to the new song here.

Iron & Wine at the Midland

Last night at the Midland, Iron & Wine's set ebbed and flowed through the strange and familiar. By Jared McNett read more