In a continuing effort to bring listeners quality music and media innovation, KKFI will be streaming several live musical performances from the 2014 Folk Alliance International Conference, February 19-20. The performances will air on the radio, as well as on a separate video stream on the station’s YouTube Live Channel.

KKFI is proud to support the Folk Alliance International conference, which relocated its headquarters to Kansas City recently and holds its annual conference here. The conference attracts thousands of participants and hundreds of performers. Keynote performers and guests include Graham Nash and Al Gore, among others. For tickets and other information, visit the conference website at http://www.folk.org/

KKFI recently concluded a Kickstarter crowdfunding campaign to raise $10,000 to purchase equipment that allows the station to broadcast live events from remote sites. In recognition of the financial support of listeners KKFI proudly presents these performances for your listening and viewing pleasure.

Performances include the following musical groups. Note: Each performance is 30 minutes in length.

8:00-8:30 pm – Street Corner Choir is the songwriting duo of Lezlie Revelle and David Hakan. Accoring to the group’s website their performance includes “inspired guitar arrangements, solid gold lyrics and velvet harmonies — you’ll think you just stepped off the bus and entered the gates of heaven.”

9:00-9:30 pm – Old Sound – “Our unique sound is created through a blend of strong melodies, heartfelt lyrics and three-part harmonies. The tone of our vintage instruments adds a percussive rhythm and a pulse to the music. Though steeped in tradition, we believe our music also has a relevance and modern feel.” – see their Facebook Page

9:30-10:00 pm – Dan Bliss – “Seeded with narrative stories and instrumentals, one can hear echoes of Leon Redbone, Django Reinhart, Taj Mahal… Each performance is a mischievous delight. There is his ornery side-ways smile and just a hint of a nasal drawl infusing each tune with a muddy, crawfish authenticity.” – Present magazine

7:00-7:30 pm – The Bills are a high impact, acoustic folk music quintet from the West Coast of Canada. They have developed a unique sound, blending traditional influences from around North America and the rest of the globe in crafting their own vocal and instrumental music.

7:30-8:00 pm – Ruth Moody is an Australian-born soprano singer-songwriter and member of the Canadian folk trio The Wailin’ Jennys.

8:30-9:00 pm – Ray Bonneville is a Canadian traveling blues singer, musician, and songwriter. Born in Canada, and raised in the United States, Bonneville is a blues-influenced, song and groove man who is strongly influenced by New Orleans, Louisiana.

Listen or view these performances

KKFI is “Local and Vocal”; Show Your Support Through Feb. 8

Your gift today will help KKFI get that much closer to the goal of finishing the drive successfully and generating... read more

Artspeak Radio, a live 30-minute program about the thriving visual arts and literary community in the Kansas City area, will... read more

Winter Fund Drive Update: Thanks to KKFI Supporters — wherever you are!

Many thanks to the hundreds of supporters of KKFI 90.1 FM, Kansas City Community Radio who donated during the Winter... read more

KKFI is proud to announce two new programs on the weekly schedule. Kasey Rausch and Mikal Shapiro are hosts of... read more

Program Notes on KKFI radio shows for the week of September 10-16 These program notes provide details to several locally-produced and... read more 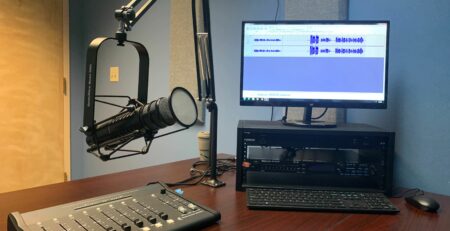 Even More Progress! Work continues on the new Production Studio. Speakers have been securely installed with power above the ceiling. New... read more

Contact the team at Tune into Live Music Performances from the 2014 Folk Alliance International Conference.